Start a Wiki
After the update of Patch - 2019.12.19, the game will launch a trial for a new version of the Eternal Battlefield map. The new map will be available daily from 8.00 PM-10.00 PM. The Gold and Experience received after completing the map are also 3 times higher than the current Eternal Battlefield map (the bonus decreased with the number of completed matches within the same day).

Aside from the mechanic similar to the old Eternal Battlefield, such as Item System and Battlefield Point System, several new systems are implemented into the game. The new Eternal Battlefield also removes the rule for players to be able to win the game by destroying the opponent's Sword of Damocles since the map no longer has any minions or buildings to support the fight. The limited number of players on each time is also increased from 7 vs 7 to 14 vs 14, making the fighter between players become more chaotic. 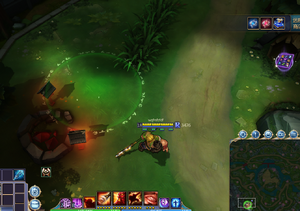 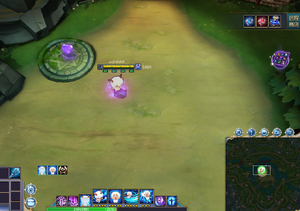 At several fixed locations on the map, they will appear the magic circle area where it spawns a random rune that grants a certain type of buff to any player who collects them.

At several fixed locations on the map, they will also appear in the magic circle area where it can teleport anyone who stands over it away in the direction they are currently facing. 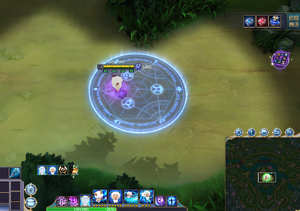 Any player who didn't submit their points and get killed, all their points will be transferred to the killer. Each player can store up to 3000 points from killing.

At several fixed locations within the new map, there are also areas where they spawn a certain type of monsters with different strengths and abilities, killing them grants points similar to killing heroes to the killers, the number of points received will be based on the strength of the killed monster (Small Monsters = 6 points, Lesser Dragon = 20 points). 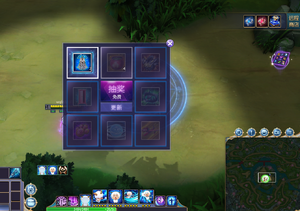 Within the game, you will earn 2 chances to draw the roulette for free. Starting from the 3rd chance will cost you Diamonds equal to [2 x Times of Chance]. Each draw randomly grants you a special item with unique abilities from the roulette, the received item will be put into your roulette item slots for using their special abilities, received special items last until the end of the match.

The special items you have will be stored on 4 special slots with the hotkey [7] [8] [9] [0] for using their abilities. The hotkey can be changed in the Options as usual.

The information about all available Roulette Items is as follows:

(Shield of The Round Table) (妖刀)

Retrieved from "https://300heroes.fandom.com/wiki/Eternal_Battlefield_(Trial_Version)_(2019.12.19)?oldid=59004"
Community content is available under CC-BY-SA unless otherwise noted.