The record is divided into 4 sub-categories based on the game mode as follows: 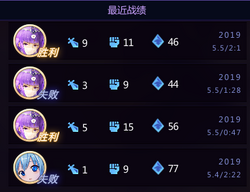 Retrieved from "https://300heroes.fandom.com/wiki/Profile?oldid=64244"
Community content is available under CC-BY-SA unless otherwise noted.